Santorini is an island in the southern Aegean Sea, about 200 km (120 mi) southeast of Greece’s mainland. It is the largest island of a small, circular archipelago which bears the same name and is the remnant of a volcanic caldera. It forms the southernmost member of the Cyclades group of islands, with an area of approximately 73 km2 (28 sq mi) and a 2011 census population of 15,550. The municipality of Santorini includes the inhabited islands of Santorini and Therasia and the uninhabited islands of Nea Kameni, Palaia Kameni, Aspronisi, and Christiana. The total land area is 90.623 km2 (34.990 sq mi) Santorini is part of the Thira regional unit.

Santorini is essentially what remains after an enormous volcanic eruption that destroyed the earliest settlements on a formerly single island, and created the current geological caldera. A giant central, rectangular lagoon, which measures about 12 by 7 km (7.5 by 4.3 mi), is surrounded by 300 m (980 ft) high, steep cliffs on three sides. The main island slopes downward to the Aegean Sea. On the fourth side, the lagoon is separated from the sea by another much smaller island called Therasia; the lagoon is connected to the sea in two places, in the northwest and southwest. The depth of the caldera, at 400m, makes it impossible for any but the largest ships to anchor anywhere in the protected bay; there is also a fisherman’s harbor at Vlychada, on the southwestern coast. The island’s principal port is Athinios. The capital, Fira, clings to the top of the cliff looking down on the lagoon. The volcanic rocks present from the prior eruptions feature olivine, and have a small presence of hornblende.

It is the most active volcanic center in the South Aegean Volcanic Arc, though what remains today is chiefly a water-filled caldera. The volcanic arc is approximately 500 km (310 mi) long and 20 to 40 km (12 to 25 mi) wide. The region first became volcanically active around 3–4 million years ago, though volcanism on Thera began around 2 million years ago with the extrusion of dacitic lavas from vents around the Akrotiri.

The island is the site of one of the largest volcanic eruptions in recorded history: the Minoan eruption (sometimes called the Thera eruption), which occurred some 3,600 years ago at the height of the Minoan civilization. The eruption left a large caldera surrounded by volcanic ash deposits hundreds of meters deep and may have led indirectly to the collapse of the Minoan civilization on the island of Crete, 110 km (68 mi) to the south, through a gigantic tsunami. Another popular theory holds that the Thera eruption is the source of the legend of Atlantis.

Excavations starting in 1967 at the Akrotiri site under the late Professor Spyridon Marinatos have made Thera the best-known Minoan site outside of Crete, homeland of the culture. The island was not known as Thera at this time. Only the southern tip of a large town has been uncovered, yet it has revealed complexes of multi-level buildings, streets, and squares with remains of walls standing as high as eight meters, all entombed in the solidified ash of the famous eruption of Thera. The site was not a palace-complex as found in Crete, but neither was it a conglomeration of merchants’ warehousing, as its excellent masonry and fine wall-paintings show. A loom-workshop suggests organized textile weaving for export. This Bronze Age civilization thrived between 3000 and 2000 BC, reaching its peak in the period between 2000 and 1580 BC.

Many of the houses in Akrotiri are major structures, some of them three stories high. Its streets, squares, and walls were preserved in the layers of ejecta, sometimes as tall as eight meters, indicating this was a major town. In many houses stone staircases are still intact, and they contain huge ceramic storage jars (pithoi), mills, and pottery. Noted archaeological remains found in Akrotiri are wall paintings or frescoes, which have kept their original color well, as they were preserved under many meters of volcanic ash. The town also had a highly developed drainage system and, judging from the fine artwork, its citizens were clearly sophisticated and relatively wealthy people.

Pipes with running water and water closets found at Akrotiri are the oldest such utilities discovered. The pipes run in twin systems, indicating that Therans used both hot and cold water supplies; the origin of the hot water probably was geothermic, given the volcano’s proximity. The dual pipe system, the advanced architecture, and the apparent layout of the Akrotiri find resemble Plato’s description of the legendary lost city of Atlantis, further indicating the Minoans as the culture which primarily inspired the Atlantis legend. 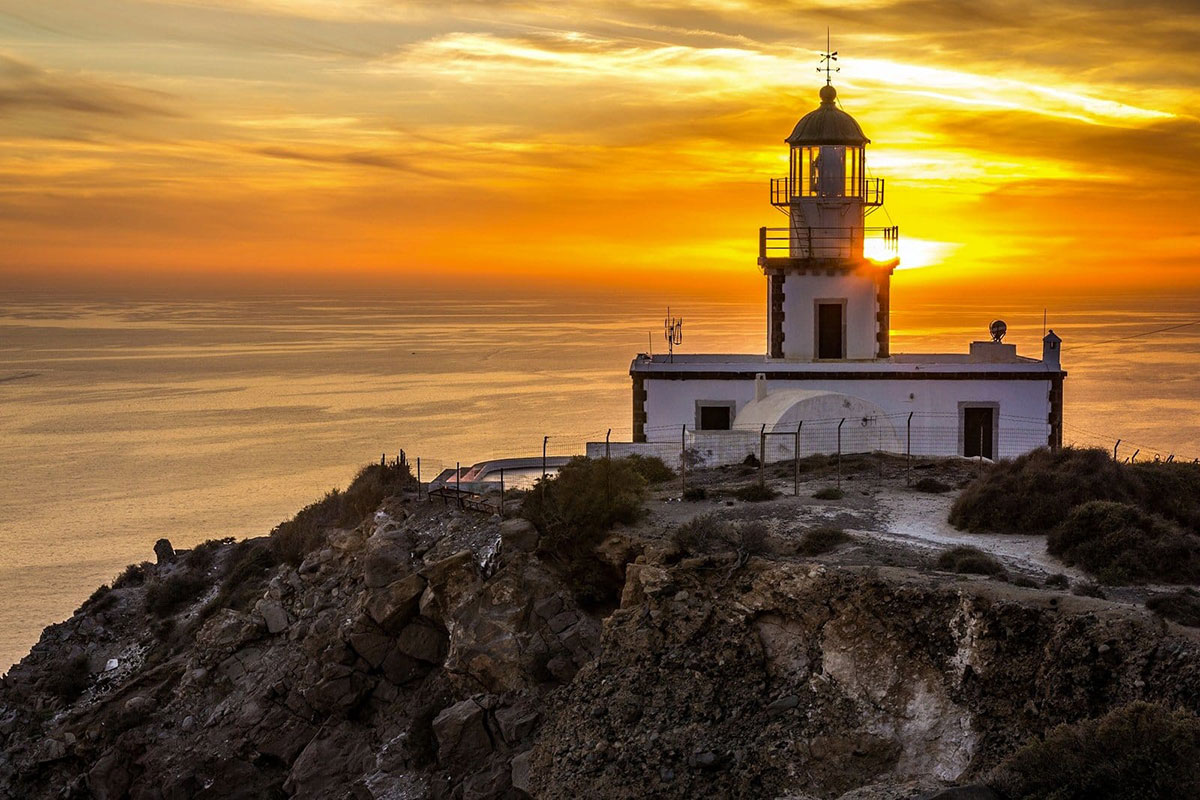 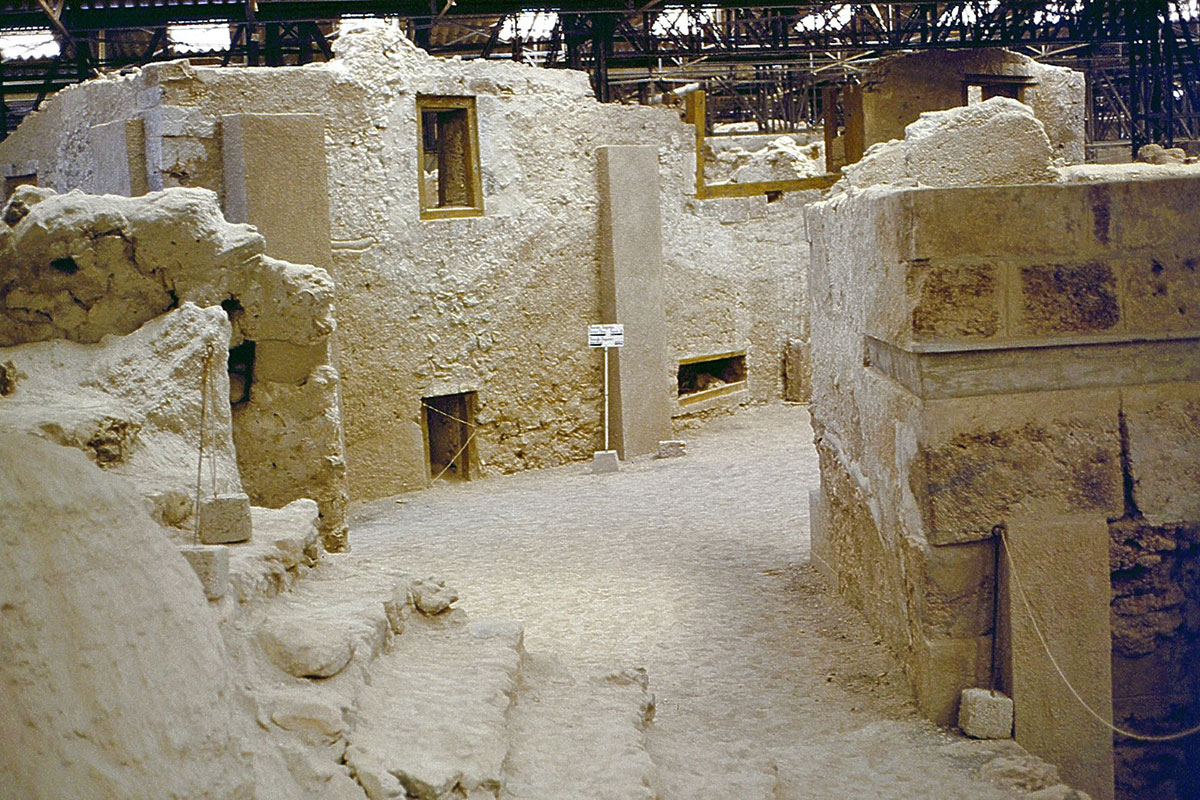 It is one of the most important prehistoric settlements of the Aegean. The first habitation at the site dates from the Late Neolithic times, a sizeable settlement was founded and in the Middle and early Late Bronze Age (ca. 20th-17th centuries B.C.) it was extended and gradually developed into one of the main urban centers and ports of the Aegean. The large extent of the settlement (ca. 20 hectares), the elaborate drainage system, the sophisticated multistoried buildings with the magnificent wall-paintings, furniture and vessels, show its great development and prosperity. The various imported objects found in the buildings indicate the wide network of its external relations. The town’s life came to an abrupt end in the last quarter of the 17th century B.C. when the inhabitants were obliged to abandon it as a result of severe earthquakes. The eruption followed. The volcanic materials covered the entire island for two decades and the town itself. These materials, however, have protected up to date the buildings and their contents, just like in Pompeii. 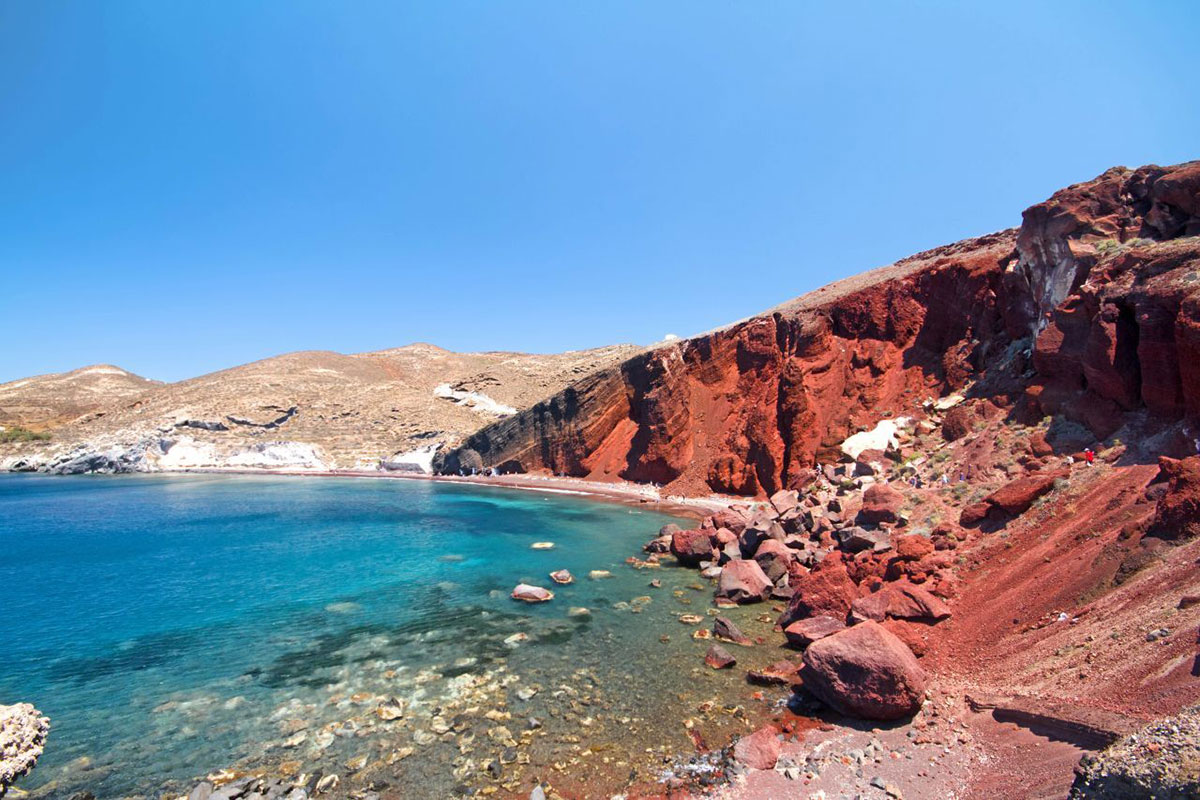 Its name is a tell-tale sign of what the visitors will encounter when approaching it – if of course they can believe that it “tells” the truth… And yet, this beach is actually red: red, impressive rocks that form steep cliffs, red sand and a sea of deep blue, reflecting also the bright red of the landscape. A landscape truly ‘alien’ that scientists have only perhaps encountered on … Mars, the “Red Planet” – without of course the beautiful sea! Red sand typically indicates that there is a significant quantity of iron nearby, either in the earth or deposited over years of volcanic activity. 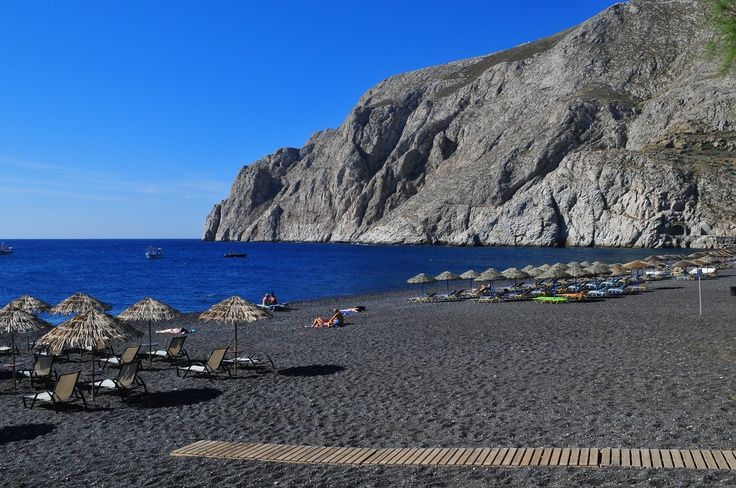 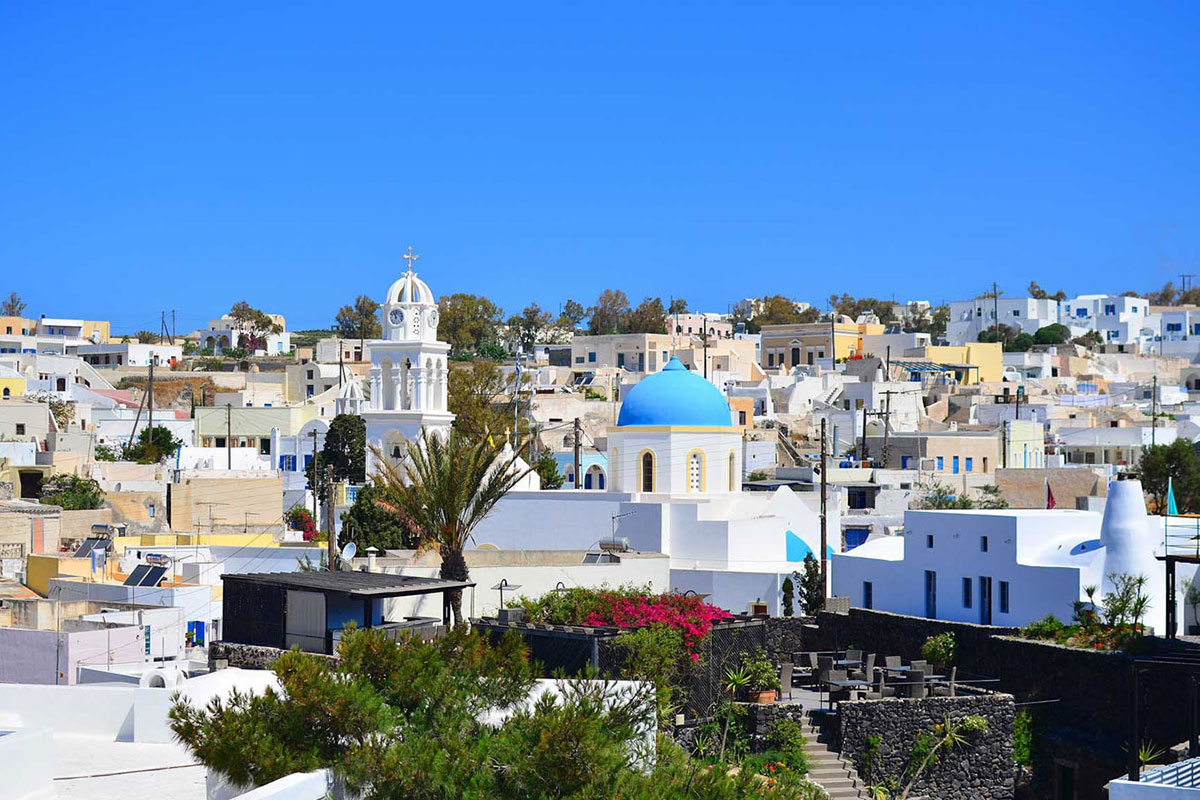 Megalochori is a picturesque, full of life village with friendly, lively residents. The central square is the heart of the village where locals gather in traditional cafes to unwind and have fun, creating a warm atmosphere. It is definitely worth spending an evening here in order to be part of this sentiment and taste local dishes under the natural shade the trees provide. You can find traditional taverns, cafes and shops in other corners of the village as well.

If you meander around the cobbled paths you will admire distinct buildings, such as neoclassical houses, stately homes and old cave houses with solid wooden doors and high fences, which were used as a protection from the pirates. Many of these have been restored and hence give you the chance to see images that date back to the 17th century. Another landmark of Megalochori is the elaborate steeples of the impressive churches, two of which stand at the center of the village. There are more adorable churches and chapels to explore throughout the village. The chapel of Agios Nikolaos, for example, is built on a fantastic location on the caldera cliffs, from where you can cherish a striking sunset and a stunning view in dazzling, peaceful surroundings.

The location of the village offers sublime views on the breathtaking caldera on the west and on a vast valley on the east, full of vineyards that Megalochori is renowned for. It also holds three of the most important and exceptional wineries, Boutaris, Gavalas and Antoniou, where you can tour and learn about the production and history of wine-making and, of course, savor unique volcanic wine varieties.

Megalochori is located on the southwest part of Santorini, about 9 kilometers from the capital Fira, and provides easy access to the extraordinary beaches that lie to the south, like Vlychada and Eros. From Megalochori, on the caldera side, you can visit two dissimilar, arresting beaches; Thermi and Plaka. They are remote with hot springs and therapeutic waters and are accessible only on foot or by boat. The view of the volcano and Therasia is totally rewarding and the volcanic promontory that surrounds them is staggering. There are two notable chapels, one above each beach. As far as accommodation is concerned, there are elegant hotels, luxury suites, villas and apartments that overlook the caldera or the plain; an outstanding view either way. 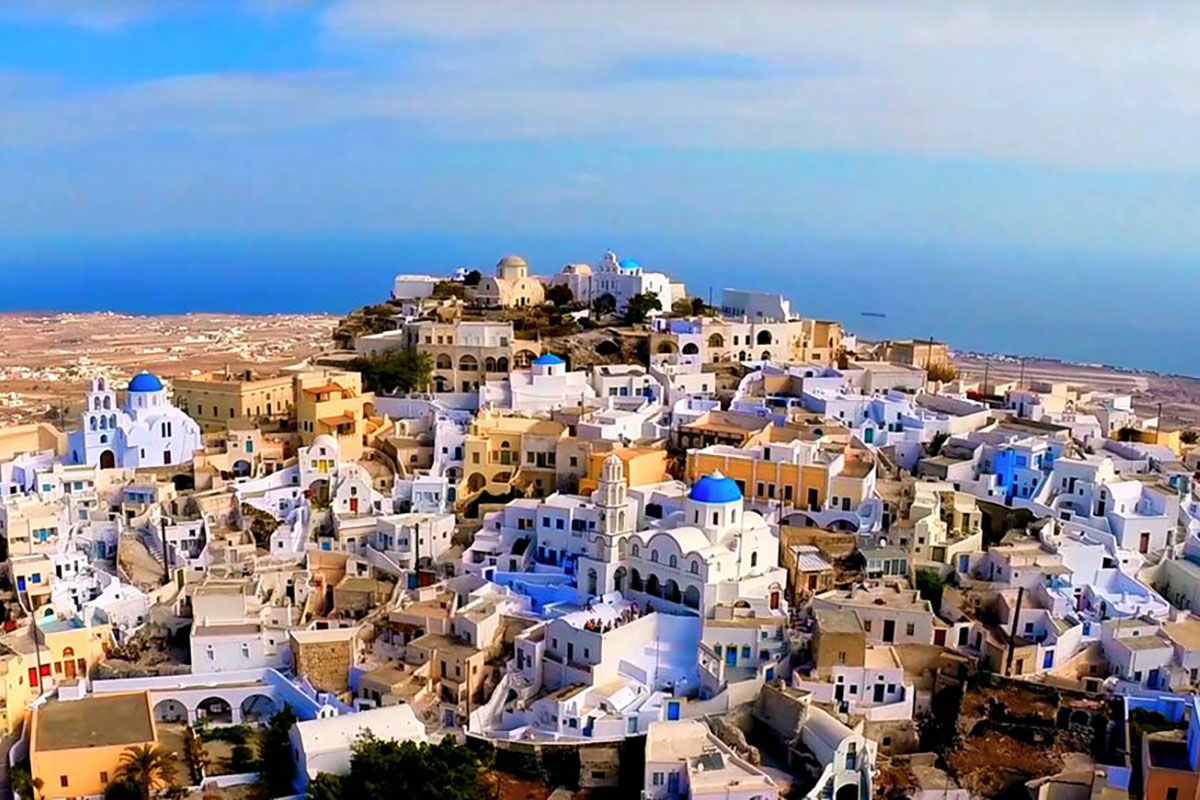 This is Pyrgos, the largest preserved village on Santorini and the island’s former capital. Strategically built in the heart of the pre-volcanic hinterland and at the foot of Mt Profitis Ilias, Pyrgos affords panoramic views. Yet, located that bit further from the famous caldera, it has been spared the terraces, balconies, infinity pools and master suites that adorn the glossy covers of tourist magazines the world over. Pyrgos is not swamped by sunset spotters, nor is it the first choice among the hordes of cruise-ship passengers. Its charm is different: more subdued, less picture-perfect, little advertised.

The historic Church of the Presentation of the Virgin Mary (1660), one of Santorini’s largest and most important places of worship, was welcoming the faithful for the first time after a lengthy restoration: its masterful pulpit and intricate woodcarved altarpiece have been fully restored after centuries of wear and tear.

If you feel inclined to visit Pyrgos, get your climbing shoes on. This is the only way to explore the Pyrgos Kasteli, the best preserved of the five Venetian castles that once adorned the island. Don’t worry about getting lost; just head uphill from the main square and you’ll find it, a fortress hamlet that started life as a monastery and grew in size after the arrival of the Venetians at the beginning of the 13th century. It initially consisted of two- and three-story houses, wisely built into a dense, labyrinthine compound, with the outer walls forming a perimetric shield against pirate invasions. The one and only gate led to the interior, and a guard bolted the wooden-andmetal door shut at sunset. Over the door, there was a fonissa or murder-hole, through which hot water could be poured onto the heads of intruders. When, with time, the risk of invasions diminished, the dwellings of the fortified perimeter dropped their guard, opening up windows, doors and liatika (sheltered balconies), and the original citadel began to expand beyond the walls of the castle, forming the Kseporto (literally, “outside the gate”).